One time only- Flash Fiction Fairytale

A Mermaid in Texas

She don’t know why, when she said yes to the legs, yes to the idea of dancing with a guy in a tux, all Fred Astaire, she wound up in Texas. The guy had a motorbike, but that didn’t stop her. When she considered dancing it was always old timey, he took off his leathers to Ginger her.

Hot as the devil’s fart, she thinks. The air con blinks. She gets beer out the fridge, wishing she could flop inside like a fish. She don’t do seafood, makes her sick. It arrives at mini-marts in dusty vans, all the sea sweated out.

She limps down the steps, never got too used to the walking thing. It’s too early to stare at application forms. She don’t write good. Everything she ever needed to know came in waves.

She sniffs, dips her feet into her paddling pool the kids a trailer over probably pissed in. Bastards, won’t leave it alone coz she don’t yell- just looks, eyes grey as caught carp.

Sometimes, she misses her voice. It seemed a fair trade. She weren’t much using it. Water talked for her. Then, when it didn’t, when she got the legs and the man, her mouth got kept too busy to chat. It’s good, he said, to be a woman who don’t bitch.

Somewhere, on a shale beach lies the conch with her voice in, surrounded. She imagines kids picking it out to take home in plastic buckets. Maybe, someone is holding her shell to their ear. Hears. She wonders if it still sings, likes to think she has a song out there.

The paddling pool stagnates, flies drown. She drags bleach from under her deckchair, pours it in the water and gets in. Sniffs. The neighbours don’t speak, hate her, coz she stinks. She scrubs bleach on her thighs and lowers herself, lets it clean the gutted bit between her legs, because she stinks. She knows it. That’s why he stopped touching her, never came home. 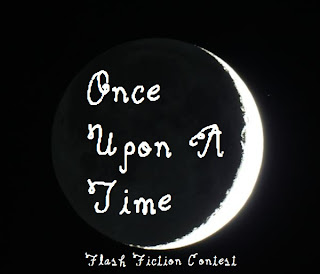 (This is my entry to the Once Upon a Time flash fiction competition.)